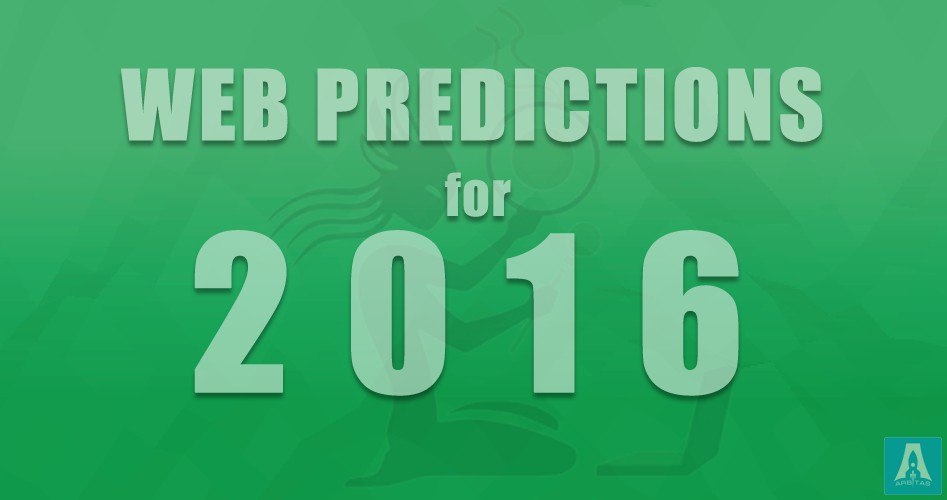 Happy New Year! Despite my woeful 2015 predictions I’m going to try again. My runes show the web aligning with Uranus…

1. A Major Corporate Hack Will Occur

Let’s get the doom-mongering out of the way. A large multi-national corporation will be hacked during 2016. It’s a certainty. Targets in 2015 included the IRS, the FBI, VTech, Ashley Madison, T-Mobile, Scottrade, CVS, OPM, UCLA Health, Carphone Warehouse, TalkTalk, Trump Hotels and even LastPass — the password manager. Personal data was stolen and, in the worst cases, passwords and credit card details were revealed.

Despite media reports of sophisticated attacks, many of these systems were accessed using nothing more complex than SQL injections or brute-force attempts. Many systems leaked unencrypted data or had woeful security.

Hacks will continue until companies take security seriously. No system will ever be 100% secure but I suspect many of these systems were implemented years ago by novice developers. My advice: hire some hackers or pay a bug bounty before it’s too late.

Static site generators such as Jekyll, Middleman and Metalsmith have been available for several years. A typical content management system builds a page from template files and content stored in a database when a visitor accesses. A static site generator completes the build step only once and generates the full site as HTML files. The benefits of a static site:

Static site generators make sense for content sites with fairly infrequent updates. They are popular among technical writers, but more agencies and corporations will adopt them in 2016.

Chrome is currently the world’s most popular web browser, with a 54% market share based on usage. I don’t expect that figure to drop, but I doubt Chrome will reach 60% before the end of the year. The reasons include:

Browser competition is healthier than ever. This is a good thing: we never want to return to an IE6-like mono-culture.

Vivaldi is a new web browser which rose from Opera’s ashes. When Opera switched to Blink, many users were disappointed to discover few of version 12’s features were ported across. Several former employees joined forces to create Vivaldi and return the browser to its former glory. It includes features such as site-specific tab colors, quick commands, notes, email, panels and full customization.

Vivaldi is unlikely to exceed a single-digit market share, but interest will increase during 2016 — especially among former Opera and power users.

While I don’t necessarily agree Safari is the new IE, it’s fallen noticeably behind other browsers — including those from Microsoft:

Safari is vulnerable as HTML5 becomes a viable alternative to native apps. The most dedicated Apple fanboy will consider abandoning their iPhone when the browser offers a sub-standard experience.

Apple has some easy options. It could permit competing browsers on iOS or switch to the Blink engine. Doing nothing threatens the long-term success of their devices.

6. CSS Grid Layout Will Be Usable

The CSS Grid Layout Module has been a W3C working draft for almost four years. Only one browser offers some support: IE/Edge. Chrome, Opera and Firefox have experimental implementations but CSS Grids will finally be viable during 2016.

Grids and Flexbox can co-exist. Grids can be mostly used for page layout — headers, footers, sidebars, etc. Flexbox will be used for layout within containers such as forms and widgets. Whatever happens, the age of convoluted floats is coming to an end.

I don’t normally predict design trends, but this seems inevitable. Mobile-first will become a layout philosophy — not just a technical approach. Despite the possibilities of responsive web design, similar layouts will be used on all devices. Menus will be accessible via hamburger icons. Sidebars, which have been a staple part of web design since the table-layout days, will become redundant.

Vast swathes of the web will become simpler, sleeker and performance aware. That is a good thing. Google AMP and Facebook Instant will be consigned to the technological trash compactor.

I predict this every year but, if simpler design trends continue, perhaps it could happen? Average page weight has doubled during the page three years and now exceeds 2.2MB. It wastes time, bandwidth and user sanity, but we’re obsessed with meaningless high-resolution photographs, underused social media integration and intrusive advertising.

At the very least, I hope the rate of obesity growth will slow from 1.3% per month.

9. WebAssembly Will Be a Niche Technology

WebAssembly was one of the most hyped announcements of 2015. It makes JavaScript delivery more efficient by compiling source to a simpler, faster-processing, JavaScript-engine-compatible bytecode and packaging it in a compact binary file. In essence, it reduces the payload size so the application launches faster (although it does not necessarily run faster).

C/C++ to WebAssembly compilers should arrive during 2016, which will benefit those creating complex games or vast browser-based applications. I suspect it will be several more years before the majority of us consider compiling JavaScript assets. Technologies such as the imminent HTTP/2 could improve JavaScript delivery without any effort.

In the early days, SEO meant tricking search engines with inane repetition of appropriate and inappropriate keywords. Google killed that with a PageRank algorithm which used hyperlinks to rate relevancy. That led to an explosion of automated web page farms with a sole purpose of linking to specific sites. Google improved their algorithm further and this process died.

This technical to-and-fro continued since people wanted quick and easy ways to reach #1 in Google. SEO was sold like snake oil — a mysterious technique which had no guarantees yet your site would fail without it. SEO companies: you had a good run. You had twenty years of dubious technical practices and undeserved revenues but it’s time to move on. Google has beaten you. Clients are wise to your ludicrous claims and scare tactics.

There is a guaranteed solution which worked since the beginning: write good content which interests others. That’s it. You can have some impact with code optimization and Search Engine Marketing (SEM) techniques such as advertising and social media campaigns. However, the days of offering SEO as a expensive separate service have ended.

Apologies if you’re working for a great SEO company which doesn’t make unsubstantiated or misleading promises. I’m sure there are some out there — I’ve just never encountered one.

Do you agree or disagree with any of my predictions? Do you have better foresights?