How the Software for the Microcredit Kiosks was developed 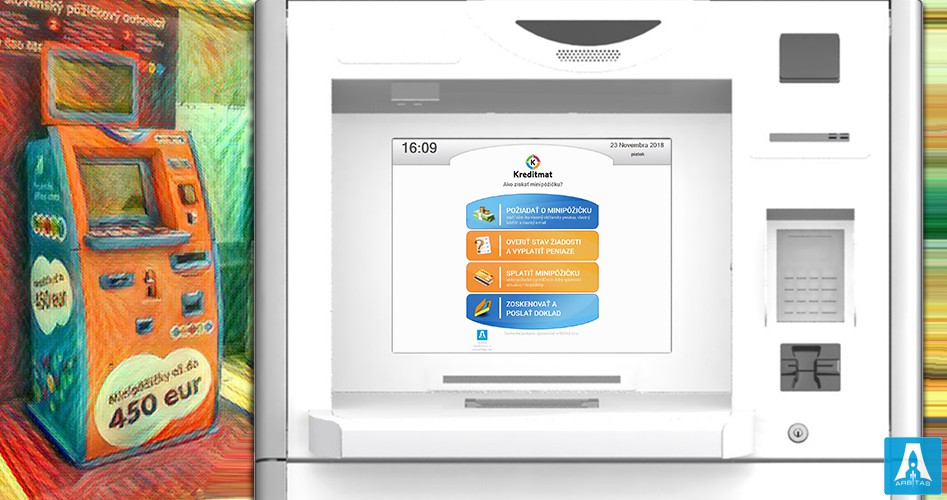 How the Software for the Microcredit Kiosks was developed

It would be mediocre to measure this project in thousands of lines of code or in hundreds of cups of coffee. That's pretty clear that in more or less serious project all team of developers does not sleep enough and almost bathes in coffee and energy drinks. So no one will be surprised by that. But the fact that every project is also

will only be remembered at corporate parties.

So now, let's look behind the scene and we will tell you a little about how we developed the software for issuing microcredit and what outcome we had except for the twitching eye of our CEO.

Whatever project we start, we firmly believe that in order to get a quality product we need to get to its very essence, need to immerse ourselves in it and we have to look at the project from every angle and understand what it is for and how it will improve people's lives. That's why the development of software for credit kiosks we began by studying the history.

We learned that the first microloan was issued by a professor of economics Yunus Muhammad in Bangladesh in 1974. Banks weren't really interested in such small sums or in financing the poor. Therefore, a 27$ business loan Yunus lent ten women from his own pocket. The Grameen Bank, which still exists today, was founded by the professor only in 1983.

We were inspired by this story. We saw that the automation of the microcredit process can be a historical event and will significantly reduce the interest rate. After all, the borrower won't have to pay office rent and to the exaggerated staff of the lender, and one loan officer can be in several places at the same time. So, what else was left for us to do? We started improving the world of loans.

The next step was to study the microcredit market. We did not rely only on statistics and get 14 short-term loans in various banks and credit organizations of the capital. Together with the information provided by the client, we had more than enough data to form the AS IS business model, to analyze it and develop the TO BE model. After several iterations of refinement, the customer was pleased with the new business model and we have already considered ourselves experts in microcredit issues. After that, everyone was really impatient to move on to the development stage.

THAT BORING DEVELOPMENT STAGE AND A FUNNY RAINING STORY

It is believed that at the development stage programmers only code, testers only test, customers call and write every hour like clockwork to see if they can already get some result while managers and the CEO are running in all the directions and getting their portion of grey hair. That's too simple, isn't it? Well, we had a little more fun.

Our programmers almost started to cast spells trying to make more than 10 independent devices manufactured by various companies work together. Our testers kept adding fuel to the fire, inventing the most improbable scenarios for the behavior of potential users to each new testing iteration. And our stressed out PM couldn't cope with the assertiveness of the client and on one Friday he announced:

"The client goes to the conference in Munich on Tuesday. He wants to show how to issue applications using the kiosk and he asks to bring the kiosk there as well."

What started after that! Hearing those news made programmers call truce with testers for the first time in the entire project. And together they all started moaning about why the kiosk cannot be shown to anyone yet.

“This module won't be ready on Tuesday,” the head of the development department spoke.

“It doesn't have to be ready on Tuesday. It must be ready on Monday,” our CEO intervened. - "After lunch there will be a truck. We are loading and I am going there to have time to install and connect everything by the beginning of the conference. By the way, what kind of pizza you guys want? We have a lot of work!"

Surprisingly, by Monday lunch we managed to finish and test the module. The CEO took the kiosk to the conference and the team remained on full alert. In case of emergency, we had to connect remotely to the kiosk and set up, fix, or upload a new version of the software. But, luckily, we didn’t have to do any of this and in the next few days there was this boring silence in the office.

The same cannot be said about the events in Munich. Our stoically patient CEO did not disclose all the details the first week after his return. He spoke little at all. But then we found out bit by bit that it was raining in Munich and there was no movers. We found out that the driver parked across the road from the conference venue and didn't want to circle around looking for a truck entrance, we learned about how our boss went to ask for help from the organizers, and when he returned, he discovered that the kiosk was lonely getting wet on the side of the road and slowly but surely began to slide on the wet grass into a ditch.

But the most important thing: the customer and his guests were very pleased that they were able to apply for a microcredit using the kiosk.

"Of course, it was! Otherwise, how would we understand that we shouldn't transport kiosks to the conference by ourselves? Now I can say for sure that it was a valuable and somewhere even fun experience. And the fact that my eye is twitching now is nothing, it will soon pass."

To say that we are now more carefully choosing contractors would be an understatement. Reliable partners, even if it's only a cargo company, is the basis of a successful business.

We no longer transport half-ton kiosks for conferences. We simply put one in the customer's office and from time to time we update the version of the software. Whether to buy a kiosk or to rent it for the time of development, the customer decides for himself. After all, this way it is more convenient and more easy for everyone.

And yes, we did improve the productivity of our client's loan officers. Each employee can now easily cope with the flow of applications from 5 to 10 credit kiosks. And now a dozen operators in one cozy office can service a network of microcredit kiosks covering an entire city or even a small country.

The customer reduced the costs of maintaining offices thanks to our software. Now it is enough to rent a place with an area of a meter per meter with a socket and Internet access and to service customers where they most often are: in the shopping center, at the entrance to the store, at the bus stop or even in the underpass. And we are damn happy with this result.

Watching the results of some work on staff efficiency and of simple cost optimization, we ourselves thought of some changes. But this is a completely different story.